Combining elements of popular culture, community engagement, pedagogy, and contemporary art, Minor Threats examines and highlights the relationships between girl culture, rock music, and public space. Appropriating the name of the early 80’s all-male punk rock band Minor Threat, this exhibition uses the gallery as a platform to give visibility to teenage girls engaged in music as well as celebrate real (and imagined) all-female bands from the past and present.

Minor Threats includes a single-channel video installation, a music rehearsal space for jam sessions, and music paraphernalia from an imagined female punk rock band from the early 80’s. The eponymously titled single-channel video installation juxtaposes found and newly shot footage of teenage girls performing covers of AC/DC, The Ramones, Nirvana, and others. Inspired by the abundance of self-produced YouTube videos of girls playing electric guitar in their bedrooms, female teen guitarists were invited from across the Greater Toronto Area to choose a YouTube video to re-perform in a public space where they usually spend time.

Transforming part of the gallery into a functional music rehearsal space, complete with a couch and rug, instruments that the girls play, amplifiers, a mixer, and headphones, Febbraro has paired local teenage girls with female musicians to play music together during gallery hours.

Thanks to a partnership between Rock Camp for Girls and La Centrale, three local musicians have committed to three jam sessions each with a small group of young female musicians. In this way, Febbraro’s project aims to establish inter-generational connections in the Montreal music scene, while engaging teenage girls in creative learning opportunities. Finally, music paraphernalia archiving the history of a fictional all-female punk rock band Minor Threats will be displayed in the gallery. This will include a series of “vintage” posters of the fictional band’s shows from 1981-1983, as well as guitar picks that the lead guitarist painted herself.

Sarah Febbraro lives and works in Toronto, Canada. Her art practice incorporates performance, video, documentary, installation, community engagement, social practice, and drawing. She received her BFA from Concordia University and her MFA from The School of the Art Institute of Chicago in 2008. She has presented at The Power Plant (Toronto), Art Gallery of Mississauga (Mississauga), Toronto Free Gallery (Toronto), PLATFORM Gallery (Winnipeg), Disjecta Space (Portland), the MAI (Montréal, arts interculturels) (Montreal), Blackwood Gallery (Toronto), the Whitney Biennial (NYC), Skulpturenpark (Berlin), and Mess Hall (Chicago). In 2013, she had a solo exhibition at Queen Elizabeth Park Community & Cultural Centre presented by Oakville Galleries exhibiting The Portrait Project, a project she created while working as the community arts programmer at Oakville Galleries. She is currently in the group exhibition Borderline at The Living Arts Centre (Mississauga).

The artist thanks the Ontario Arts Council for their generous support of this exhibition. 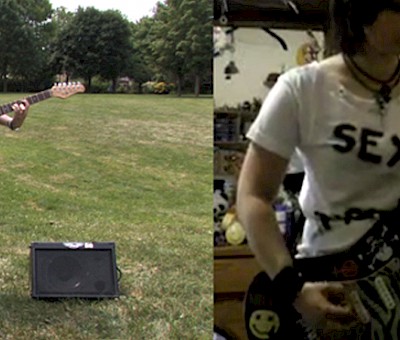