"I use wastefulness left in the world as a tool in my work. I try to respond to the symbiotic relationship that exists between humanity and its material environment." - Justene Williams

Through a performative video installation at La Centrale, Sydney artist Justene Williams brings together high and low art, history and salvage, painting and video, in a hypnotic new form of recycling - a curiously "carbon neutral" method of image production.

Her practice attempts to conjure the spirits of the overlooked, female art figures such as the Baroness von Loringhoven, Sophie Taeuber Arp and Valentine De St Point. Trained as a child in dance, Williams employs video as a performative medium, creating elaborate sets and costumes from "waste" materials, in which absurd and repetitive actions are executed.

Justene Williams creates still and moving imagery in her ‘lens-based’ practice. She interrogated the camera as ‘a machine for making images’ in her earlier works, which blurred the objects under the camera’s gaze, exploring different ‘marginal’ or suburban archetypes, and now, more recently, creates works that play across the boundaries between performance, portraiture and fashion.

This grouping of selected recent video works are a part of a recent cycle of work that pushes lens-based imagery into painterly and sculptural realms. These works relate closely to a group of moving image works that the artist has undertaken where she creates overwhelming environments constructed from detritus, photographs and suburban props, such as cement mixers and tread mills. Using cardboard and tape she then creates costumes which she wears for the camera.

The bizarre environments that the artist makes become the stage for increasingly odd actions built around repetitive, collaged movements – running, dancing, ducking and weaving like a punch drunk 3-dimensional painting. The figure, camouflaged against the backdrop, disappears in and out of vision accompanied by jerky movements akin to a Cubo-futurist dance. It is as if, a person (body), can be made invisible or swallowed up in a city.

The work itself has a sculptural presence – it is displayed on teetering accumulations of television monitors, placed on top of hastily painted wooden pallets. The monitors remind us of their own obsolescence – they are big, bulky, black boxes that are disappearing fast – as opposed to stylish, thin plasma screens.

Justene Williams’ work encompasses video, photography and performance. In recent work Williams has constructed elaborate sets and costumes made from collaged paper and a variety of “waste” or refuse materials. In these complex and fabulous environments she performs absurd actions in an attempt to reconstruct the essence of lost images (both from her personal archive of photographs and from the annals of art history). 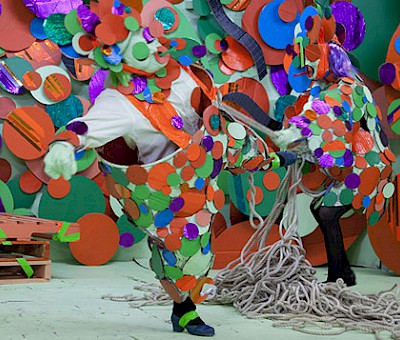