La Centrale is very glad to announce the inauguration of the crossed residency programm in performance art between La Centrale and organism dedicated to art and culture CRVENA (Sarajevo) in collaboration with the MSU, Museum of Contemporary Art (Zagreb).

The exchange residency project was collaboratively initiated by La Centrale’s performance committee and the members of CRVENA, during the spring of 2017. The project reflects La Centrale’s desire to expand upon the already existent performance residency, available to Montreal artists since 2011. This international exchange is intended to promote the work of Montreal performance artists, as well as the knowledge and discourse surrounding feminism and performance practices. On May 25, 2017, the members of CRVENA (Sarajevo) and La Centrale (Montreal) wrote an agreement outlining the terms of this collaboration.

CRVENA and La Centrale are two organizations whose mandates and philosophies both focus on their local feminist artist communities. In the spring of 2017, this biennial residency opened with an inaugural visit to Sarajevo from La Centrale’s performance committee. During this occasion, La Centrale and CRVENA organized a series of events, including an exhibit of videos and performances. Whereas La Centrale has, since its inception, been particularly invested in performance, this residency is unique in its collaborative and international nature.

As part of this exchange with CRVENA and Museum of Contemporary Art in Zagreb (MSU), La Centrale will host Europa Enterprise, a project by Lala Raščić (in collaboration with Andreja Dugandžić and Jelena Petrović) in July of 2018. Europa Enterprise is a project that reaches across Paris, Zagreb, Sarajevo, Belgrade, Prizren and now, Montreal. Raščić will develop and perform a process-based creation in La Centrale’s gallery space over the course of 15 days. A public presentation will take place at the end of the residency.

In May of 2018, artist Adriana Disman will be hosted by CRVENA for a two-part residency. The first will involve 17 days of research at Museum of Contemporary Art in Zagreb (MSU). This will be followed by 11 days at the Nona Residency in Sarajevo, whereupon the artist will have the wonderful opportunity collaborate with CRVENA’s members and community.

This project is made possible thank to the support of the CALQ, Canada Ambassy in Zagreb, CRVENA (Sarajevo), MSU, Museum of Contemporary Art (Zagreb) and Nona Residency. 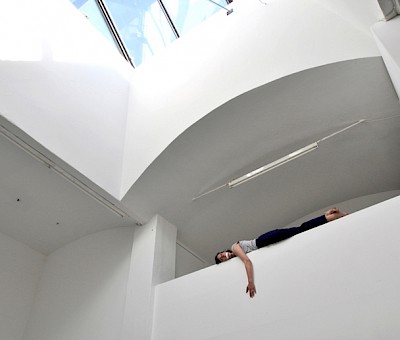