The Dollhouse at the End of the World

As half of the world is burning and the other half is under water, as people around the world are uprooted by effects of man-made climate change, war and increasingly extremist governing, the Dollhouse at the End of the World confronts this complex moment of deconstruction to address the chaotic, nonsensical worldwide choreography that we are collectively performing. The installation tackles the state of the world today – teetering on the brink of 2 minutes to midnight and environmental apocalypse – through collecting and combining the five artists’ practices and materials of work to give birth to a recombined ominous aesthetic.

The Dollhouse was initially created during a ten-day-long performative residency in Montreal’s Gallery YMUNO in February 2018. Consisting of a gigantic glowing jellyfish crashing through the wall of a destroyed suburban home, along with a forgotten iPad embedded in a smashed armchair stuck on an endless loop of news of the destruction of the planet’s ocean ecosystems, illuminated by a pixelated projection of grain fields playing over the torn wallpaper and a chandelier overgrown with brambles, this mixture of found objects, video and sculpture was originally presented as a gallery-sized immersive installation.

IFPP will re-imagine this work as a window installation in La Centrale, where they will bring the key installation elements along with other accumulated materials and video projections into the space and work together both in situ and virtually to recreate an updated version of the Dollhouse at the End of the World to bring us into 2020.

Phantom Pregnancy: A condition in which the body believes it is gestating new life. A delusional expectation, a feeling out for something else to come.

Incubator: where we host and nurture such delusions.

The Incubator for Phantom Pregnancies is comprised of five intergenerational female artists from diverse backgrounds and disciplines, all of whom now live and work in Montreal: ​Dana Dal Bo, Emily Jan, Csenge Kolozsvari, Tammy Salzl, ​​and ​Sandra Smirle. Each is a transplant from elsewhere (Ontario; California, USA; Hungary; and Alberta).

The members’ collaboration is fueled by their various professional practices (painting, video, sculpture, sound, performance, and the net) and shared interests (cooking, making, storytelling) resulting in hybrid projects in which differences and contrasts are considered and valued as a spark for future creations. 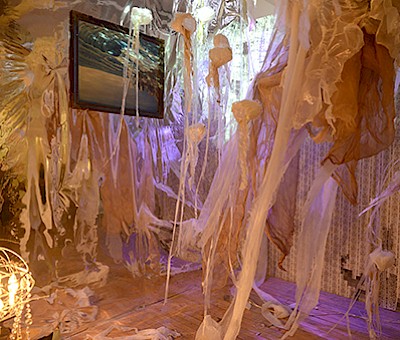