La Centrale is proud to present performances by Maria Evelia Marmolejo and Rosamond S. King in the context of VIVA! Art Action 2019.

Maria Evelia Marmolejo was born in Colombia in 1958. She started her practice of political and feminist performance in the late 1970s in Cali, Colombia. The female body plays a powerful role in addressing the socio-political and ecological issues that affect Latin America and the world at large. She holds an MA in Arts from Queens College, CUNY. Marmolejo’s work has been presented both inside and outside art institutions, most of them in private places, others in public spaces with or without the agreement of the authorities. She has participated in various exhibitions in her native country of Colombia, as well as in other countries. She has been invited to participate in triennials and the live archives of performancesre.act.feminism # 2. In 2016, she won the CIFO Grants & Commissions Program Award. She participated in the major exhibition The Political Body: Radical Women in Latin American Art: 1960–1985 designed by curators Cecilia Fajardo-Hill and Andrea Giunta.

Rosamond S. King's creativity is deeply rooted in her stories, cultures and communities - Trinidadian, Gambian, American and queer, among others - as well as in a sense of play. Her performances have been programmed in many places in New York including Movement Research, the Metropolitan Museum of Art, Dixon Place and the Caribbean Dance Collective. Her works have also been presented at Encuentro 2014 in Montreal and at the African Performance Art Biennial in Harare. They draw on more than 20 years of training in Afro-Caribbean and West African dance, circus arts, butoh and ballet. Also a critical and creative writer, King wrote the collection of Rock Poems | Salt | Stone, which won him the Lambda Prize, and Island Bodies: Transgressive Sexualities in the Caribbean Imagination, winner of the Best Book Award from the Caribbean Studies Association. King is an associate professor at Brooklyn College, part of the City University of New York. Her goal is to make people feel, wonder and think, usually in that order. 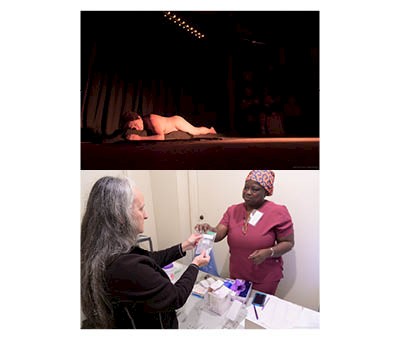