Unexpected circumstances have forced us to cancel Andrea Liu’s exhibition. We deeply regret this turn of events and thank you for your understanding.

We invite you to join us for the performances that will be presented at La Centrale, on November 2 and 5!

Cyber-selfing the “I” and the I / Me Cyber-couplet
Performance - Wednesday November 2, 5pm to 7pm

Cyberself’s Ego, Cybserself’s Id, and Cyberself’s Superego splintered into 3 separate Facebook accounts. Cyberself’s Ego was infatuated with the proliferation of her own image on Facebook; the self-indulgence of her vanity was the sole proof of the vitality of her existence. Cyberself’s Id was sullen, festering with envy at CyberOther’s vacation pictures at his summer cottage by the sea. Cyberself’s Superego, with a missionary zeal, was posting four times a day to keep people vigilante on ETFUW (Everything That is Fucked Up in the World).

Her mom had always told Cyberself: Remember, the CyberOthers are always out there, in the ether, whether latent or active: de-individuated thick globs of CyberOthers. If a contagion infiltrates, a diffuse fluid diaspora could suddenly coalesce into a temporary constituency.

Cyberself asked herself, “How do I will my Cyberself into being in the context of this kaleidescopic onslaught of CyberOther Fragments? (career plugs, self-revelation, polemics, obituaries, baby pictures, logistical/meeting info, extemporaneous expostulations, First World spoiled brat complaints of the FB newsfeed).

A performance lecture on the construction of exteriorized projections of our CyberSelf in the witnessed presence of both latent and active CyberOthers. The performance will be realized through a site-specific tour of Andrea Liu’s Facebook newsfeed that day, which will be live-streamed back to her FB audience.

Visitor One Thru Eight
Performance - Saturday, November 5, 6pm to 8pm

Visitor One wants to be integrated into the grand narrative of appreciating art. Visitor Two believes in the mystery and the unknowability and the ineffability of art. Visitor Three believes in the emancipatory potential of extreme experiences. Visitor Four yearns for linear narratives and emotional storytelling. Visitor Five believes art should be something direct and visceral, an intimate offering amongst friends--it should not have to be funneled through the language and superstructure of the art world. Each Visitor is a speculation on a hypothetical audience member.

Barthes’ 1967 essay The Death of the Author rejects the monolithic pre-fabricated authority of the author as the sole determinant of meaning of a text, and hails the “birth of the reader”—the multifarious positions of the reader that comprise the true producers of meaning. In any given performance, there is a vast reserve of untapped resources: the audience. The audience is a crystal, through which various desires, ideologies, assumptions, backgrounds, biases are refracted, projected, frustrated, appeased, challenged, or fulfilled. Visitor One thru Eight inhabits various modes of performance in order to unpack what are the conditions and ideologies that underlie spectatorship.

She received her dance training from Limon Institute, Trisha Brown Summer Dance Intensive, and MELT, and she danced for NYC choreographers koosil-ja hwang, Jennifer Monson, and Elise Knudson. Her work often deals with rendering critical theory performative, the friction of the image/text binary, and problematizing the seamless ideological production (and ingestion) of images. She works in hybrid dyads such as theory/performance, text/performance, text/image, performance/political speech, dance/political speech. 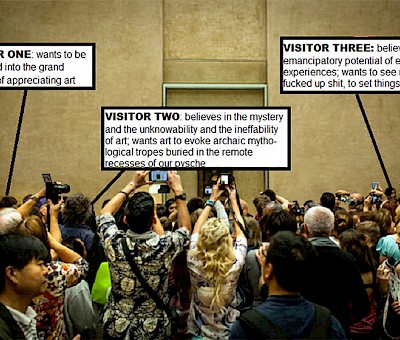