To Valerie Solanas and Marilyn Monroe in Recognition of their Desperation

Six performers are following the score To Valerie Solanas and Marilyn Monroe in Recognition of their Desperation, which the composer Pauline Oliveros wrote in 1970 after reading the text Scum Manifesto by Valerie Solanas (who is also known for shooting Andy Warhol).

Oliveros‘s composition asks the performers to choose five pitches each and to play very long tones, modulated or unmodulated. In the middle section of the piece the performers are invited to imitate each other‘s pitches and modulations. The cues in this piece are given collectively through light. If anyone becomes dominant, the rest of the group should come up and absorb that dominance back into the texture of the piece, “expressing at the deep structure what the SCUM Manifesto meant. ... It was really out of that understanding of both community and the individual – which was in her manifesto – that became the principle, or the philosophy, of the music that I began to write.“ (Oliveros)

The piece To Valerie Solanas and Marilyn Monroe in Recognition of their Desperation values the unpredictable and unknowable possibilities that might be activated by not specifying pitches and rhythms. Nothing is known in advance of making the music. The instructions are chosen in order to insist on “a continuous circulation of power“ (Oliveros) between listening and sounding - a give and take that requires, as Oliveros says, an unusual attention to the relationship between oneself and others. The film introduces the 16mm-camera as an additional performer, who constantly moves and interacts with individuals or groups of performers.

The work poses the question of the possibilities and limits of a politics of musical and filmic forms. Can sounds, rhythms and light produce queer relations? Can they become revolutionary?

Pauline Boudry and Renate Lorenz have been working together in Berlin since 2007. Their staged films and film installations often start with a song, a picture, a film or a script from the past. They produce performances for the camera, staging the actions of individuals and groups living — indeed thriving — in defiance of normality, law and economics. Their films upset normative historical narratives, as figures across time are staged, projected and layered. Their performers are choreographers, artists and musicians, with whom they are having a long-term conversation about performance, the meaning of visibility since early modernity, the pathologization of bodies, but also about glamour and resistance. 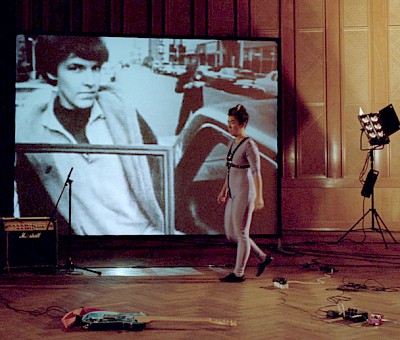