** A discussion between Dayna Danger and the contributors in the production of her artworks will be held at La Centrale, as part of RAOTIHÓN:TSA - Focus on Firsts Nations' contemporary creation.

Articulated around the diffusion of Waawaate Fobister’s Agokwe, the event presented by La Chapelle will take the form of many related events, in different locations, through multiple artistic disciplines. The RAOTIHÓN:TSA program brings about a new generation of indigenous artists that uses the power of their voice to make possible the evolution of the current cultural landscape. The discussion will be held on Wednesday April 13th, from 5pm to 7pm, at La Centrale. **

In this two-person exhibition, Indigenous artists from Canada and Australia, Dayna Danger (Metis/Ojibway/Polish) and Cecilia Kavara Verran (Uritai/Pasikfika/Scottish), investigate the lives of cultural objects that have been institutionalized, de-contextualized and commodified. Danger and Verran examine how objects have been removed from Indigenous nations, and the historical relationship between Indigenous peoples and museums, in relation to issues of conquest, process, consent, knowledge, protocol, and decolonization. The artists propose an alterity to the museum discourse where individuals have agency over their cultural production, including the autonomy to appear how they wish in their bodies, culture, and medias.

Dayna Danger is an emerging Queer, Metis/Ojibway/Polish artist raised in Winnipeg, MB. She is currently based in Montreal, QC while obtaining her Graduate degree in Studio Arts from Concordia University.

Utilizing photography, sculpture, and video, Danger 's practice questions the line between empowerment and objectification by claiming space with her human scale work. Co-opting the visual language of fashion and pornography, she repurposes and challenges perceptions of power, gender, performativity, representation, sexuality, and mixed identities.

Heather Igloliorte is an Inuk art historian and independent curator from Nunatsiavut, Labrador. She is an Assistant Professor of Art History at Concordia University, where she also holds a university research chair in Indigenous Art History and Community Engagement.

Cecilia Kavara Verran is a conceptual artist working in diverse media. She is interested in the intersection of collective memory and contesting our pasts and futures through cultural augmentation. Her work deals with themes of diasporic isolation, sexuality, gender identity, cultural and historical erasure.

She has a Bachelor of Fine Arts from RMIT University, Australia. In 2013 she completed an exchange program at Concordia University, Canada, in the Intermedia Cyber Arts studio area. She has shown work in various exhibitions in Australia & New Zealand. 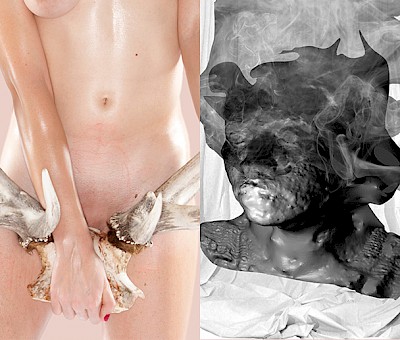