Falling Woman, an exhibition of work by Christine D’Onofrio, features a large scale, looped video depicting a woman trapped in a never-ending fall.

The fall references many art historical works and media events. From Yves Klein's photomontage farce Leap into the Void, to the loss of control in the humble gestures of Bas Jan Ader's falling pieces and Marilyn Monroe’s infamous skirt blowing scene in The Seven Year Itch wherein Monroe’s famous flirtatious gesture concealed a humiliating moment. D'Onofrio addresses the influence feminist discourse has had on her own practice and positioning, and particularly references second wave feminist artist Ana Mendieta, known for her site-specific installations and performances. Mendieta attempted to retrieve the nude body from the masculine eye; in her signature "Sileuta" series she imposed her body onto the environment with impressions of her contours, a series that foreshadowed her untimely and suspicious death. In Falling Woman the body continues to be a battleground of desire and exploitation. The fall represents D'Onofrio's interest in contrived depictions of unconsciousness. The piece plays with the dream of falling interpreted as a loss of control or the feeling of fear and humiliation that comes in dreams of being naked. The wind from the fall forces the protagonist's dress over her head, which simultaneously conceals her identity and exposes her body, acting as a natural yet exploitative flirtation with the camera. Control and autonomy clash, for the subject has not jumped nor has she been pushed and she will never land; instead she is in the midst of a continuous fall. The meeting of these moments manifest themselves in an endless sublime sky wherein we witness the woman fighting to connect with it.

Alongside Falling Woman, D'Onofrio will present her newest work, Feminist Joke Book ; a 21 page, accordion-style, traditional letterpress book entitled “How many Feminists does it take to change a Lightbulb?" The book reveals different punch lines to this iconic joke, some insinuating feminists’ prudish stereotypes, as in the iconic punch line “That’s not funny” others referring to the tactics and processes necessary for feminists to gain a voice. Perhaps it is these stigmas and reputations that have complicated feminist declaration or motives today. Hopeful mixed with chauvinistic punchlines progress in chronological order that follow the waves of feminism. The book finishes with, “Trick question. Feminists can’t change anything” --an affective reality of the difficulties of making change.

Christine D'Onofrio would like to express her gratitude to the Canada Council for the Arts for their generous support in the research and production of Falling Woman. 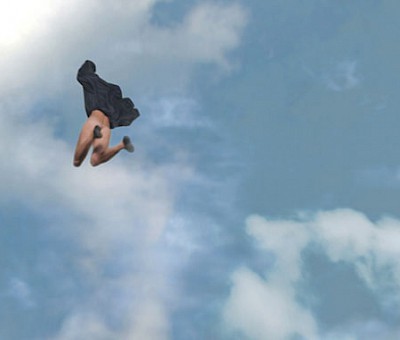