Put Your Back Into It

To gyrate one’s hips is commonly referred to in North America as ‘winding’ and is routinely used on the dance floor to invoke arousal from a potential partner, often with the intention of subsequent copulation. Similar to many animals as well as other cultures throughout the world, pelvic thrusts and shakes of the derrière are dominant components of mating practices among Western youth and young adults. Put Your Back Into It explores the mores of winding, grinding and twerking through the examination of contemporary memes . YouTube videos, Twitter feed, and cultural artifacts are dismantled, reassembled and embellished to question how current forms of digital dissemination impact the formation of female identity and romantic ideologies.

Viral phenomenons such as Gangnam Style and Harlem Shake exemplify the potency that dance possesses, as it is capable to cross cultural, social, and linguistic borders. As dances undergo various degrees of appropriation, these memes recurrently become removed and divorced from the authentic conception. Gyral hip movements have historical roots connected to notions of fertility, and in other societies they continue to be used within rites of passage to denote or encourage transformations of status, such as girlhood to womanhood. These sacred dances have been vastly appropriated by North America and have spawned the prolific culture of winding, grinding and twerking. Put Your Back Into It investigates the obscure spaces between spirituality and sexuality, adolescence and adulthood, public and private, and reflects on the progression, or perhaps regression of our culture’s codes, customs and rituals.

Sarah Gotowka is an adopted Korean-American-Polish-Italian artist from upstate New York, based in Montréal. Her artistic practice is rooted in her unhealthy obsession with R&B, an impediment she has suffered from since early childhood. She received her BFA from The Cleveland Institute of Art in 2007 and is now an MFA candidate from Concordia University’s Fibre and Material Practices department. 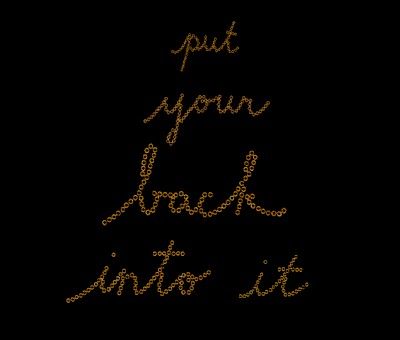