Over the course of the past year, Sheena Hoszko, Vincent Chevalier and Michelle Lacombe (in collaboration with Emilie Roby) were tattooed. Presented as part of La Centrale’s 2010 programming, these tattoos exist as conceptual gestures and ongoing performances, research-based works that manifest themselves permanently on the skin’s surface. The works therefore find their meaning in very intimate encounters as well as through public forums.

La Centrale’s new performance series Powerhouse Performance,will be inaugurated by a discursive event elaborating upon the three body art projects and their respective research. Contextualizing the marks on the artists’ bodies will allow a line, an image and a word to unravel into complex sites of experimental embodiment and critical reflection. Following the presentations, Erin Silver will lead a public discussion on the individual works and their overlapping themes.

This work exists as a reproduction of Giorgione’s “Sleeping Venus“ (1510), a painting that can be credited for having first depicted the female nude within a Western canon of art history. The influence of this image continues to characterize Western readings of real female bodies, particularly in feminist body art and performance practices. The Venus Pose, executed in October 2010, consists of seven lines tattooed on my body by Emilie Roby. These lines recreate those fragmenting the posed body in the “Sleeping Venus“. Marking my body with lines excerpted from the painting’s figure is an attempt to collapse two contradicting but inherently linked bodies: the represented and the real.

Since the 1970s, when members of the leather, kink, and BDSM community used different-coloured hankies to indicate sexual preferences while cruising, wearing a coloured hanky in one's back pocket has been a notable symbol of public sex for queers. In May 2010, I had the outline of a hanky sticking out of a jeans pocket tattooed on my right buttock, as part of an ongoing performance work entitled Blank Hanky, Bottom Right. As a "blank" hanky, the tattoo can be filled in with markers of various colours depending on the type of sex act myself (and my sexual partners) would like to engage in. The tattoo is a performative site on which the gesture of marking my body becomes a negotiation of desire between myself and another person. In doing so, I hope to engage an ongoing dialogue about sexual identity and queer histories, specifically the ways in which community is formulated around shared cultural experience.

The verb Ressentir was tattooed on my upper right arm by William HB at Tatouage Pointe St.Charles in Montreal during the winter of 2010. By utilising a word that connotes the act of being affected, I am foregrounding the project’s intention to highlight the similarities and differences between emotional and physical feeling through language and gesture. Through a needle piercing the skin, Ressentir seeks to embody an emotional sensation while both referencing and paying homage to the memorial and dedication-based tattoo traditions. This project is accompanied by a zine that traces my understanding of the word Ressentir and how it currently manifests itself within my artistic practice. 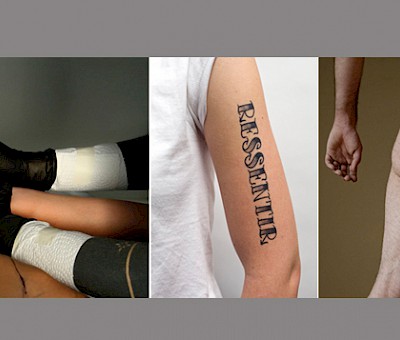